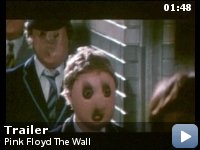 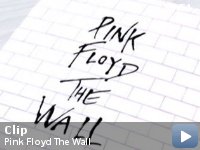 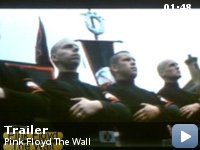 A troubled rock star descends into madness in the midst of his physical and social isolation from everyone.

Storyline
The movie tells the story of rock singer "Pink" who is sitting in his hotel room in Los Angeles, burnt out from the music business and only able to perform on stage with the help of drugs. Based on the 1979 double album "The Wall" by Pink Floyd, the film begins in Pink's youth where he is crushed by the love of his mother. Several years later he is punished by the teachers in school because he is starting to write poems. Slowly he begins to build a wall around himself to be protected from the world outside. The film shows all this in massive and epic pictures until the very end where he tears down the wall and breaks free.

Taglines:
The Memories. The Madness. The Music… The Movie.

The scene in which Pink is calling his home from the United States and is very depressed to hear a man's voice, was made by actually placing a call to England through a random, unsuspecting AT&T operator. The conversation was recorded and played over the filmed sequence.

Continuity:
When the young Pink finds his father's service revolver and ammunition in his mother's bedroom, the ammunition has a metal jacket (i.e. the actual "bullet" part has a brass casing over it). When he dishes them out to his friends in the railway embankment the rounds are ordinary lead rounds without he brass casing.

Pink:
[singing]
So ya, thought ya might like to, go to the show. To feel the warm thrill of confusing that space cadet glow. Tell me is something eluding you sunshine? Is this not what you expected to see? If you wanna find out what's behind these cold eyes, you'll just have to crawl your way through this disguise!

Why is The Wall so often misunderstood ?

However, I cannot tell you how disappointed I am that this movie is so
underestimated, and, above all, misunderstood. How many times have you heard
someone say something like: "You can't watch 'The Wall' unless you're really
drunk or really high" ? I have heard this line probably from every single
person that has seen the movie and it hurts me so much that nobody really
tries to understand the movie.

The key to understanding the movie is in the lyrics. The movie is not just
a long series of video clips that accompany the album. The images are just a
final piece of the puzzle, the final touch on a magnificent piece of
art.

The first time I saw this movie I felt very embarassed. Yes, embarassed,
because I felt like a fool for hearing the album so many times and not
realizing what it was about. The movie made me appreciate the lyrics of a
rock song for the first time in my life.

The week after seeing "The Wall" for the first time I bought Pink Floyd's
"The Final Cut". Do you know what was the first thing I did when I opened
the CD case? I read the lyrics, from the first to the last word. And I
actually tried to understand what the album was about.

"The Wall" is so much more than you think it is. The only solution to not
understaning the movie is watching it again and paying more attention. Once
you get it, you will never forget it.