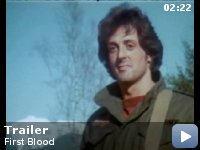 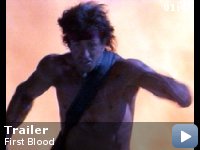 A mentally unstable Vietnam war vet, when abused with a small town's police force, begins a one man war with it.

Storyline
John J. Rambo is a former United States Special Forces soldier who fought in Vietnam and won the Congressional Medal of Honor, but his time in Vietnam still haunts him. As he came to Hope, Washington to visit a friend, he was guided out of town by the Sheriff William Teasel who insults Rambo, but what Teasel does not know that his insult angered Rambo to the point where Rambo became violent and was arrested, as he was at the county jail being cleaned, he escapes and goes on a rampage through the forest to try to escape from the sheriffs who want to kill him. Then, as Rambo's commanding officer, Colonel Samuel Trautman tries to save both the Sheriff's department and Rambo before the situation gets out of hand.

Taglines:
One war against one man.

In the DVD commentary, Sylvester Stallone compares Rambo to the monster of Dr. Frankenstein and Col. Trautman as the doctor, in the respect that Rambo is a war machine monster created by America to do its bidding, but then he escapes and runs amok, but also wanting to fit into a society who shuns him, and Col. Trautman basically was instrumental in making Rambo into what he is and feels remorse for how he turned out and does what he can to help make things right.

Continuity:
When John holds the knife to Teasle's throat in the woods, the placement of the knife changes.

Rambo:
Can you tell me if Delmar Berry lives here?

Stallone is the most underestimated actor of his age

this is certainly not the greatest film ever made. in fact, it's plot is
predictable and formulaic, and every character is two-dimensional.

having said that, this is a film that is often dismissed as a macho action
flick with no redeeming feature. these are opinions i would
defy.

while the only imagination put into the film seems to be the various ways
in
which John Rambo can kill people, the basic theme is nevertheless a pretty
strong one. this is not meant to be a Fellini-esque commentary on life,
the
universe, and everything.

the three most important characters in the film are all played by pros.
you
have Stallone's John Rambo, Dennehy's Sheriff Teasle, and Richard Crenna's
Colonal Trautman.

Brian Dennehy hasn't missed a beat in his entire career; he's been a
superb
character actor since i've been watching movies, and – like Michael
Caine –
he always puts everything into each performance. his Sheriff Teasle is
menacing, bigoted, and protective. he comes across like a man who's
marked
his territory and won't permit intrusions. i won't say he's brilliant,
but
he is absolutely believable as a small-town sheriff faced with a situation
so far out of his own experience that he cannot figure out why he can't
solve the problem.

Crenna is a patriarchial character, such as he often seems to play. he
gives the Spec Ops Colonal Trautman enough soul to make him seem human,
and
enough blood and guts to make him seem like a veteran soldier.

of course, the centrepiece to the film is Sylvester Stallone. Stallone
always suffers from the perception engendered by his appearance. he is a
somewhat short fellow with a body of bulging unpronoucable muscles, and a
sad bassett-hound face that looks like it was designed by someone out of
"Oliver Twist."

but the man can flat-out act. he gives John Rambo depth and reality. he
comes across as far too fit and far too silent because Rambo is far too
fit
and far too silent. like his character in "Copland," Stallone is playing
a
guy who pretty much wants to be left alone and is caught up by a bunch of
people around him who are overly enthused by their own status.

while i can understand the dismissal of this film as just a patriotic
action
sop, i cannot also accept that Stallone does not give a good performance.
the man has been characatured; he's an easy target. he's a really built
short-guy. but Stallone's intelligence and creativity drove his first
film,
"Rocky," and neither quality has deserted him since. like Michael Caine,
he
does seem to take any old lame role offered to him. but he always gets
paid, and he always puts everything into his performances.

i'll never campaign for this film to be considered a "great" film, but i
think i'll always defend it's star as a guy who works too hard too often
to
get the such little credit.

i guess the best way i can put it is, i watched "First Blood," and i
believed him. i believed Stallone.

last time i checked, that is what an actor is supposed to
do.