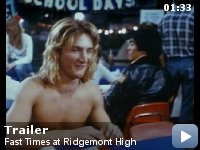 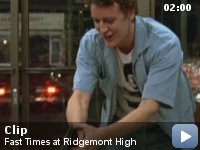 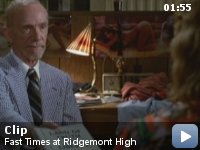 A story of a group of California teenagers who enjoy malls, sex and rock n' roll.

Storyline
Follows a group of high school students growing up in southern California, based on the real-life adventures chronicled by Cameron Crowe. Stacy Hamilton and Mark Ratner are looking for a love interest, and are helped along by their older classmates, Linda Barrett and Mike Damone, respectively. The center of the film is held by Jeff Spicoli, a perpetually stoned surfer dude who faces off with the resolute Mr. Hand, who is convinced that everyone is on dope.

Cameron Crowe wrote the screenplay based on his book. Cameron Crowe attended University of San Diego High School, he posed as a student at Clairemont High School. The principal then was not thrilled with the idea, but when he asked Crowe about musicians that he had met, he mentioned Kris Kristofferson. The principal was a big fan of Kristofferson and agreed to let Crowe on campus.

Perry's Pizza Waitress:
Linda, Linda, there he is. There's that guy from the stereo store. Don't you think he looks like Richard Gere?

Linda Barrett:
Did you see his cute little butt?

Required viewing for surviving the eighties

All throughout the decade of pencil-thin neckties and Pat Benatar look-alikes,
various films came along that served to embody the times. "Valley
Girl" (which introduced us to Nicholas Cage) and "Secret Admirer" were just
a drop in the proverbial bucket. Amy Heckerling's "Fast Times at Ridgemont
High" was the textbook definition of life as a teenager in the eighties and
remains so to this day. The story was brought to life in a very unique way
that hasn't been duplicated since:

There was no actual plot to speak of. This was just…High School.

It's a film about a group of kids looking for love, status, or a good buzz.
The film was nothing more than that, and it didn't pretend to be more. In
addition, Cameron Crowe's script made you *care* about what these kids went
through as if their individual situations were happening to us (as they may
very well have). It's almost a crime that a sequel was never made,
although a mediocre TV series was spawned. Armed with a cast of
characters that struck a chord with all of us (primarily because we knew
someone in High School who acted just like them), and a soundtrack that
reeked of the Mark Goodman-J.J. Jackson era of MTV, this film stands as a
perfect portrait of a decade a lot of us say we'd like to forget….shortly
before brushing the dust off an old Night Ranger cassette and indulging in
a guilty pleasure.