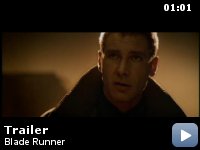 Deckard, a blade runner, has to track down and terminate 4 replicants who hijacked a ship in space and have returned to earth seeking their maker.

Storyline
In a cyberpunk vision of the future, man has developed the technology to create replicants, human clones used to serve in the colonies outside Earth but with fixed lifespans. In Los Angeles, 2019, Deckard is a Blade Runner, a cop who specialises in terminating replicants. Originally in retirement, he is forced to re-enter the force when six replicants escape from an offworld colony to Earth.

Taglines:
Man Has Made His Match… Now It's His Problem

Joanna Cassidy (Zhora) was at ease with the snake around her neck because it was her pet, a Burmese python named Darling.

Audio/visual unsynchronized:
When Sebastian is talking to Batty about his chess game with Tyrell, the shot is focused on Batty, but Sebastian's chin and lower lip are visible, and you can see that it does not move in sync with the words you can hear him saying.

This is truly one of the greatest science fiction films ever made, one that
requires a thinking viewer in order to understand and appreciate it. The
director's cut is the recommended one to see as it omits a somewhat
distracting narration and avoids an unnecessary Hollywood-style ending that
is at odds with the rest of the film's tone.


A true science fiction story or film is about ideas, not spaceship battles,
futuristic gadgets, or weird creatures. "Blade Runner" fully qualifies as
this in its examination of the impact of technology on human society,
existence, and the very nature of humanity itself. These themes are set in
a fairly basic detective story that moves slowly but gradually builds power
as the viewer is immersed in a dystopian futuristic Los
Angeles.

Harrison Ford fans accustomed to the normally dynamic roles that he plays
may be dissatisfied with the seemingly lifeless lead character that he
portrays here as the replicant-hunting detective known as a "blade runner".
They should be, for this dissatisfaction is part of the film experience,
part of the dehumanized existence in the story's setting. However, as the
story unfolds, we see Ford's character, Rick Deckard, slowly come alive
again and recover some humanity while pursing four escaped
replicants.

The replicants, genetically-engineered human cyborgs, that Deckard must
hunt
down and kill are in many ways more alive than Deckard himself initially.
Their escape from an off-world colony has an explicit self-directed
purpose,
whereas Deckard's life appears to have none other than his job, one that he
has tried to give up. By some standards, Deckard and the replicants have
thin character development. However, this is a deeply thematic and
philosophical film, and as such the characters are the tools of the story's
themes. Each character reflects some aspect of humanity or human
existence,
but they lack others, for each is broken in ways that reflect the broken
society in which they live and were conceived/created.

There are several dramatic moments involving life-and-death struggles, but
most of these are more subdued than in a normal detective story plot. The
film's power is chiefly derived through its stunning visual imagery of a
dark futuristic cityscape and its philosophical themes.

Among the themes explored are the following:
– The dehumanization of people through a society shaped by technological
and
capitalistic excess.
– The roles of creator and creation, their mutual enslavement, and their
role reversal, i.e., the creation's triumph over its creator.
– The nature of humanity itself: emotions, memory, purpose, desire,
cruelty,
technological mastery of environment and universe, mortality, death, and
more.
– Personal identity and self-awareness.
– The meaning of existence.

If you are not someone who naturally enjoys contemplating such themes, the
film's brilliance may be lost on you. The climax involves a soliloquy that
brings many of the themes together in a simple yet wonderfully poetic way.
Anyone who "gets" the film should be moved by this; others will sadly miss
the point and may prefer watching some mindless action flick
instead.

"Blade Runner" is a masterpiece that deserves recognition and long
remembrance in film history.