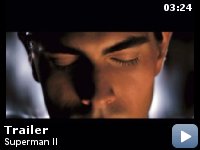 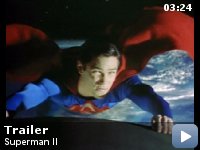 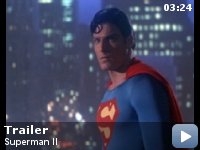 Superman agrees to sacrifice his powers to marry Lois, unaware that three Kryptonian criminals he inadvertently released are conquering Earth.

Storyline
Picking up where "Superman: The Movie" left off, three criminals from the planet Krypton are released from the Phantom Zone by a nuclear explosion in space. They descend upon Earth where they could finally rule. Superman, meanwhile, is in love with Lois Lane, who finds out who he really is. Lex Luthor escapes from prison and is determined to destroy Superman by joining forces with the three criminals.

In an early version of the script, there were four Kryptonian exile villains instead of three. The fourth member, Jak-El, was supposed to be an evil prankster and source of comic relief (a similar character to Riddler in the Batman series). In an early script, he is described as 'A psychopathic jokester, whose pranks and "practical jokes" are only funny to him when they cause death and suffering to others, this is JAK-EL.' The character was later dropped and never cast.

Crew or equipment visible:
While Superman and Non engage in subterranean hand-to-hand combat in Metropolis, the pneumatic pyro pumps are visible in the street, as the manhole covers pop upwards.

The Adventure Continues…or so we thought!

This film can be summed up in two words. Superman Trouble. That is the
case.
There are two versions of the film "Superman II." One is the vision of
acclaimed director Richard Donner, full of color flourishes, and camera
work
by the late Geoffrey Unsworth. The second, is the vision put on director
Richard Lester, by choice of the film's producers, Alexander and Ilya
Salkind. Both the films contain the same story and characters, but each
was
shot with a different tone, different dialogue and footage, which clash
with
intention. So in the end, footage from each are woven into one movie which
film buffs all over the world will notice is somewhat difficult to grasp.
Due to the different directing styles of each director, the final cut of
Superman II ends up being a cliche work of special effects, mismatched
character analysis, and central themes. The film deals with Superman and
Lois falling in love, and the three super villains from the prologue of
the
first film landing on earth and ultimately trying to take over. Very
intense
stuff. But this is where we as an audience need to know all the facts, and
here they are: The first version of Superman II, known as "Superman II:
The
Adventure Continues" was directed by Richard Donner and supposed to be
straight forward with serious tones and action packed sequences. This
version was shot simultaneously with the original "Superman" in 1977-78.
Originally to be released back to back with the original, "Superman II"
was
filmed with vigorous explosions, dangerous situations, and tense,
irrefutable drama. In the opening, a female liberation symbol, Lois Lane,
tries to prove that Clark Kent is Superman by throwing herself out a
window,
knowing that Clark(Superman) will fly out and save her. In another scene,
Superman gives up his powers and nearly kills himself, only to get them
back
later on, nearly killing himself again. This nailbittingly tense script
brought back old characters and was to bring the original "Superman" to a
full closure. All actors are fully concentrated and the print is a
paragon.
80& of this film was finished when the producers fired director Donner due
to some arguments that are still unknown to this day, and replaced him
with
director Richard Lester, and thusly, "Superman II: The Adventure
Continues"
was culminated. This is where the Richard Lester vision of the film comes
into place. Simply titles "Superman II", the Richard Lester version is
full
of clumsy comedy, amateur plotting, and is nowhere near as affective as
the
Donner version. Lester is a comic director, whom had worked on the
previous
Beatles films, "Help" and "Hard Days Night" and had no experience
directing
any international blockbusters. To give him more credit than Richard
Donner,
the producers rewrote most of the footage that Donner shot and went in
with
the actors for re-shoots…even though Donner had already taken care of
this! The villains are portrayed here as careless and comic, whereas in
Donner's version they were cold as steel, and not to be messed with. In
one
re-shot scene, we see three villains who are Superman's foes land on earth
and take interest in a snake. The snake bites the female villain and
instead
of showing her wrath on nature, as was seen in Donner's moon scene which
she
kills an innocent astronaut in cold blood, she sets the reptile on fire
and
giggles about it! Central themes of love and home were lost because of
this
as well. Because of budget problems and deadline, the producers could not
finish the re-shoot and "Superman II", and had to fill the gaps with
Donner
footage from the vault, making "Superman II" confusing and abstruce, and
that is what made "Superman II" an atavistic failure. 70% of the film is
clumsy, contrived comedy and useless violence, while 30% of the film is
straight forward, full of munificent morals and such. The final cut has
one
scene showing the villains breaking into the white house and consequently
taking over the world, with sheer John Williams music, the next scene you
see them bored and incoherently complaining about being on a world where
"mankind doesn't even resist." The first film "Superman" had morals of
justice, and the American way, while the second film was supposed to show
morals of love and home, and earthly pleasures that remind people of the
good in the world-in a sense, taking along with the "truth, justice, and
the
American way." This message was lost between the footage by raconteur
Donner
and comic Lester. Nonetheless, the film was a box office success, and many
critics, including the late Pauline Kael and Roger Ebert praised the film
for it's portrayal of good versus evil in the modern day society. Some of
the footage shot by Donner that was not put into the final cut of the film
has since been seen on network television showings and bootlegs, but not
all
of it. The original opening which gave the film a better sense of
dangerous
excitement, scenes involving Kal-El and his father were scrapped(Due to
the
Marlon Brando court case) and the full original ending have all been
locked
away in London vaults and never before seen by anyone. So on the all in
all
level, "Superman II" fails because it is nothing more than two films put
together, one a comedy, one an action drama, and this keeps "Superman II'
from being anything close to what the original has become.