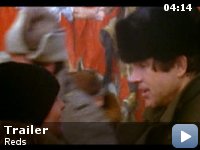 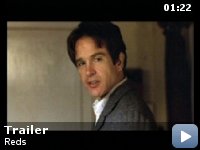 A radical American journalist becomes involved with the Communist revolution in Russia and hopes to bring its spirit and idealism to the United States.

Storyline
This movie tells the true story of John Reed, a radical American journalist around the time of World War I. He soon meets Louise Bryant, a respectable married woman, who dumps her husband for Reed and becomes an important feminist and radical in her own right. After involvement with labor and political disputes in the US, they go to Russia in time for the October Revolution in 1917, when the Communists siezed power. Inspired, they return to the US, hoping to lead a similar revolution. A particularly fascinating aspect of the movie is the inclusion of interviews with "witnesses", the real-life surviving participants in the events of the movie.

Taglines:
Not since Gone With The Wind has there been a great romantic epic like it!

The sculpture at the beginning of the art gallery scene is Auguste Rodin's "Cathedral", which depicts two right hands intertwined in a prayer-like gesture reminiscent of a medieval cathedral.

Anachronisms:
The pet dog is a Golden Retriever but the first Golden (Champion Speedwell Pluto) wasn't imported into the US from England until 1930

Witness 2:
[voiceover]
Do I remember Louise Bryant? Why, of course, I couldn't forget her if I tried.

Reds, a succinct, controversial title totally typical of a major directorial
outing by Warren Beatty. We always knew that Beatty was on the left, but a
film glamourising a known Communist who defected to the USSR and is buried
within the Kremlin. How the studios let him make it is a mystery to me, but
I suppose that the name Warren Beatty was enough.


The film is long, and not for the light-hearted. It covers the broad canvas
of early 20th Century American socialism. Concentrating first on Reeds
efforts to form an American Socialist party, before moving to Russia; Beatty
plays Jack Reed, the playboy writer, journalist and socialist. He opposes
the war after initially supporting Wilson at the Democratic convention.
After the Russian Revolution he becomes enamoured with the newly founded
Soviet Union, as does his wife and sparring partner Louise Bryant,
marvellously played by Diane Keaton who is excellent as the proto-feminist
Bryant. Self-assured and very sexy, and her tragic love triangle between
her, Reed and Jack Nicholson's character is brilliant. A number of other
actors also crop up, including Paul Sorvino and M. Emmet Walsh.

One of the most important films of its generation, and every movie fan
should make this compulsory viewing. Any aspiring left-wing intellectual
should also make this compulsory viewing – there were Communists and
Socialists in America, and one of them is even buried in the Kremlin. The
USSR may be reviled these days, but you cannot deny the hope and utopianism
that swept the world in those first few years after the 1917 Revolution.
Beatty brings all this marvellously to the screen in Reds.