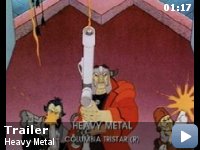 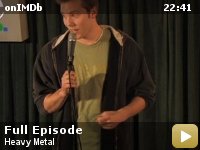 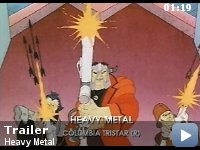 A glowing orb terrorizes a young girl with a collection of stories of dark fantasy, eroticism and horror.

Storyline
A sweeping story of the battle of good against evil is told through an anthology of short animated films about a glowing green orb (the Loc-Nar) that is the personification of ultimate evil in the universe. Based loosely on the French magazine "Heavy Metal."

Gloria (segment "So Beautiful and So Dangerous")

Zeke (segment "So Beautiful and So Dangerous")

Taglines:
A Step Beyond Science Fiction

Elmer Bernstein's theme for Taarna was actually written for the character of Alex in
Saturn 3. The theme was never heard in the film, so Bernstein used it for this film.

Continuity:
In the Den segment, when Katherine is first going to be sacrificed, she goes from being tied up to untied and struggling to tied up again.

Narrator:
A shadow shall fall over the universe, and evil will grow in its path, and death will come from the skies.

Animation is not just for kids and male teens.


I waited a bit before contributing a review for I wanted to read a few
reviews to see if what I thought would be true…and it is. So let a
lady step in and point out a few things for those who are interested in
viewing this film.


This film was actually started in 1978, and finally released in 1981
and I was there to see it. It is based on the adult fantasy sci-fi
America version magazine "Heavy Metal". The original origin of the
magazine is French, very adult, very graphic, very sci-fi, lotsa nudity
BUT excellent and compelling storytelling.

Just because its a 'cartoon', does not mean its for kids.

Looking at the Animation now in 2002, its dated. In the mid-80's
Japanese Anime has set and kept raising the bar on this kind of adult
anime genre. This early mainstream American attempt was good, for it
had a good model, the magazine, Heavy Metal.

If Heavy Metal had waited to be produced until now, with all the
advancements on technology, animation, graphics, art we have at our
disposal, I only wish that the popular artists and storytellers of the
magazine Heavy Metal were involved. It would be a different film
indeed, and it would get an NC-17 rating. The only pieces that were
trademarks of the Heavy Metal magazine were "Soft Landing"/"Grimaldi"
"Den" and "Taarna".

More specifically, "Taarna" WAS exactly what the American Heavy Metal
Magazine was all about and uncredited was Jean Giraud who has done a
hell of a lot of work in the magazines history….both American and
French versions is the cause for that. You may know his work by his
other more famous name, "Moebius".

If you ask me, the film could have gone one of two ways: just like the
magazine story by story without the silly connector of the green orb,
or with just the one story of "Taarna". Back in 1978-1981, I would
assume the Studio Executives could not venture into that manner without
getting squeamish about box office so what we have is a tip-toe cross
blend between the two. On one level it works, on another it does not.
Its a viewers decision.

I like this 1981 version of the movie Heavy Metal, although a few
stories didn't live up to the level of the magazine content..or were
not presented as such. "Neverwhereland" should have NEVER been cut, I
would have taken it over "Captain Stern" any day. "Neverwhereland"
seemed to be along the lines of the magazines' content, too bad it
wasn't included. "Harry Canyon" I could have taken or left, made no
difference.

Additionally, I JUST loved "Den" and "B-17". I loved the soundtrack,
for Metal is America. But just like the magazine, it was adult, it was
fantasy, violent at points and contained nudity. It was early "R" Adult
Animation American Style. (I know…Fritz the Cat was an "X" rated
Animation that instead of using humans, used felines. Besides, Fritz
was Ralph Bakshi's ticket outa Disney Animation and Robert Crumb is the
70's counter culture!)

It was "Taarna". This was the first animated woman in an American made
mainstream animated adult feature film that the world needed, that the
world depended upon, that was tough, that was independent, not a size
four but voluptous, and was still very sexy. Nowadays, it may not mean
much, but in 1981 when I was a teen and saw this, it meant a lot. Snow
White, she wasn't and was she the Wicked Witch of the West either and
that is how women were portrayed up till the release of Heavy Metal.

When I read a few stories in the adult magazines Heavy Metal from the
late 70's to the early 90's, both American and French versions, the
women in the majority of the stories, although drawn by European men
and set in uncertain futures, wear…and in many cases…don't wear at
all… and involved in explicit sexual situations..the women WERE the
heroes!!

All in all, keep in mind Heavy Metal was made for an adult audience,
just like the magazine. It's not just for the teenaged guys, its not
just for the stoned and metal heads, its not just for the trekies or
x-filers. It's a good effort for its time but if you're expectting work
like in late 80s/90's Japanese Anime like "Katsuhiro Ôtomo's Akira",
etc., or 2001's "Taro Rin's Metropolis" remember its 1981, and
American, and NOT quite like its name sake Magazines, but its still
good.