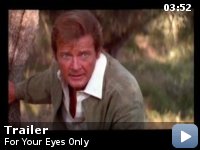 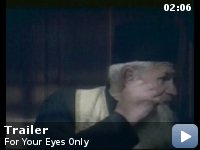 Agent 007 is assigned to hunt for a lost British encryption device and prevent it from falling into enemy hands.

Storyline
After disposing of a familiar looking face, Bond is sent to recover a communication device, known as an ATAC, which went down with a British Spy ship as it sunk. Bond must hurry though, as the Russians are also out for this device. On his travels, he also meets Melina Havelock, whose parents were brutally murdered. Bond also encounters both Aristotle Kristatos and Milos Colombo. Each of them are accusing the other of having links with with the Russian's. Bond must team up with Melina, solve who the true ally is and find the ATAC before it's too late.

Stuntman Paolo Rigoni died during the filming of the bobsled chase.

Continuity:
When Bond and Melina are dragged under water behind Kristatos' yacht, in one shot Melina's swimming suit has slipped down showing her naked bum. In the next shot it is back in place while her hands are still tied so she couldn't have done it herself.

Vicar:
Mr. Bond, Mr. Bond. I'm so glad I caught you. Your office called. They're sending a helicopter to pick you up. Some sort of emergency.

James Bond:
It usually is. Thank you.

One of Roger's best!

Undeniably one of Roger Moore's best outings as 007, For Your Eyes Only was
an attempt by Cubby Broccoli to bring Bond down to earth after the over the
top, but brilliant, Moonraker. Surprisingly this works very well, with the
action sequences being more realistic (what with a car chase, ski chase and
a small scale assault on the villain's residence instead), but brilliant
too. For Roger Moore the film offers his best performance as James Bond. The
puns are played down more here and while he does still have a little twinkle
in his eye at times, his performance reflects more an older 007, a man who
has lost his wife and is still fighting to save the world and right wrongs.
This is demonstrated in the superb pre-title sequence in which after
visiting his wife's grave, he is kidnapped by Blofeld (unofficially Blofeld
however) and taken on a wild helicopter ride. The moment were he visits
Tracy's grave sees Roger convey so much in one scene, he shows that he is
not just the comedic 007, but he can be a serious one too. We see how the
character has come to view revenge on Blofeld as he tells the dream like
Melina (a beautiful and enchanting performance from Carole Bouquet) that
before setting out on revenge as she hopes to do, she must first dig two
graves. Some would see this as hypocrisy, whereas it is the words of a Bond
who has come to analyse the hardship of a licence to kill.

With Julian Glover portraying a more down to earth villain and the plot
centering around the Cold War, For Your Eyes Only is a great 80's Bond film,
with scatterings of what would be developed into the Timothy Dalton years,
such as the serious Bond and the more down to earth story telling. Following
on the heels of two of the biggest Bond films in terms of scope and
financial success, For Your Eyes Only was a risk, but it worked. While it
did not outgross Moonraker, it's financial intake was close and while it
does possess the entertainment factor that both Moonraker and The Spy Who
Loved Me did, it is an artistic success, with great performances, an
engrossing storyline, wonderful characterization and superb direction from
John Glen in his directorial debut for a Bond film. He stages the abundance
of chase scenes well and is helped by the fact that he has a good script to
go with. On top of that Sheena Easton delivers a great theme
tune.

A great film and one deserving of classic status.