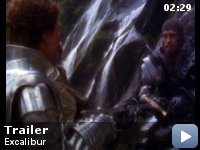 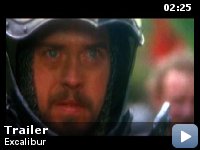 A spirited accounting of one of the most obscure periods of the world's history.

Storyline
The myth of King Arthur brought once again to the screen. Uthur Pendragon is given the mystical sword Excalibur by the wizard Merlyn. At his death Uthur buries the sword into a stone, and the next man that can pull it out will be King of England. Years later Arthur, Uthur's bastard son draws Excalibur and becomes king. Guided by Merlyn, Arthur marries Guenivere and gathers the Knights of the Round Table. Arthur's evil half-sister Morgana sires a son with him, who may prove his downfall.

Taglines:
No mortal could possess it! No kingdom could command it!

A pipe was used to create the mist coming out of Morgana's mouth in the scene were Merlin creates a fog.

Revealing mistakes:
During Merlin's speech to the knights, just prior to Arthur's announcement of the round table, etc., the hose supplying the gas for his flaming staff can be seen at its base.

A beautiful translation of a legend into sound and light.

More people telling me their favourite film, have named Excalibur, than
have
chosen any other film. People tend to feel strongly about this film. I
can
remember that when it came out, a film magazine reviewed it twice, feeling
that it had to do so, since its two reviewers had such contrasting
opinions.
In short, people who don't adore it, tend to hate it.

Those who hate it have failed to understand something very important: that
it is set in the land of dreams. Excalibur makes no attempt to be
realistic. It is the film of a legend, and it tries to create a world of
legend, and it succeeds. Once one has realised that this is not the real
world, then the film is internally consistent and works splendidly.
Merlin,
towards the end of the film, even says the line "Your love brought me back
to where you are: in the land of dreams." If anything, this makes the
film
even more tragic, because all of Arthur's sufferings have been not for his
world, but for ours.

The Arthurian legend is probably the world's best legend. It has been
told
a thousand different ways, but is so strong, that no retelling can harm
it.
The story is familiar, but this telling of it is not. The screen starts
blank, with the distant drums of Seigfried's Funeral March playing, and
after a few captions, the curtain lifts to reveal a stunning opening
sequence with horses breathing fire-lit breath into the night air, as
Uther's men do battle with those of the Duke of Cornwall. The armour is
dark, and greenish, and the movements slow, making this seem like a scene
of
battling dinosaurs. It is brutal and bloody. These are the dark ages.
This is the time of chaos from which Arthur's kingdom must come. Into the
scene, in a cloud of swirling fog, comes a figure who will be present
throughout the film, ageless and mysterious, Nicol Williamson's Merlin,
whose voice carries over the din.

I remember how suddenly I found myself immersed in this world when I first
saw the film, and even now the hairs stand up on the back of my neck
thinking about it. Allow yourself to become involved with the film, and
you will be rewarded.

The costumes are magnificent. Special mention must go to the shining
armour, and Morgana's (Helen Mirren) ever-increasingly impressive series
of
outfits. The music is stirring (it uses "O Fortuna" from Carima Burana
before this had become a cliche). The acting is theatrical and good.
Each
of these characters is on a stage, to be examined. This is not a film of
quiet intimate moments. It is a legend, and legends are
public.

Excalibur distills the Arthurian legends into one film of watchable length
very cleverly. At several points during it, a clever cut tells the viewer
that several years have passed. Single characters represent many things.
At one point Sir Percival represents all the questknights, at another
Morgana is all that is evil. In telling the story quickly, the film uses
simple direct speeches. In one scene, Arthur visits Guinevere, the woman
he
loved deeply, whom he hasn't seen for many years. He spends just a minute
in her company and leaves, and yet the speech he delivers to her is so
complete and so moving, that you do not feel robbed. He says his piece
and
leaves, needing to say no more.

It is true that the film has dated a little. Some of the hair-styles and
special effects are not quite what they would be today, and the quality of
the dubbing is not first-rate, but this is still stunning. Everything
seems
to have come together to help this film look and sound good. The skies
over
the castles are spectacular, the Irish landscape (it was shot there) looks
the part. The visual imagination and daring to have Camelot as a castle
literally made from silver, and to have Arthur's final battle fought in
fog
with a huge blood red sunset behind it, makes this a feast for the
eye.

I am writing about one of my all-time favourite films. I cry every time I
see the land burst into blossom as a reborn Arthur gallops through it, and
I
feel the heavy warmth of tragedy as he is carried off towards the sunset
to
the Isle of Avalon. I am spoiling nothing by telling you that Arthur dies
in the end. Everyone knows that he dies in the end. The whole film is
leading to that moment. When you reach the end of the film, ask yourself
this: where did he go wrong? What was it he did to lose his wife, his
son,
his sister, his best friend, all his questknights, Merlin, his kingdom,
his
life – everything he held dear?

"The one god of the many comes to drive out the many gods. The spirits of
wood and stone grow silent. It is a time for men and their ways." That's
it.