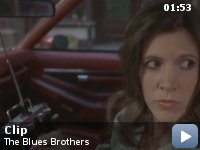 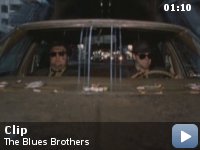 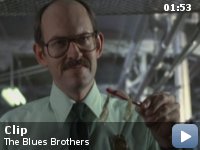 Jake Blues, just out from prison, puts together his old band to save the Catholic home where he and brother Elwood were raised.

Storyline
After the release of Jake Blues from prison, he and brother Elwood go to visit "The Penguin", the last of the nuns who raised them in a boarding school. They learn the Archdiocese will stop supporting the school and will sell the place to the Education Authority. The only way to keep the place open is if the $5000 tax on the property is paid within 11 days. The Blues Brothers want to help, and decide to put their blues band back together and raise the the money by staging a big gig. As they set off on their "mission from God" they seem to make more enemies along the way. Will they manage to come up with the money in time?

Taglines:
The Most Dangerous Combination Since Nitro and Glycerine.

In the scene where Carrie Fisher is in the hair salon doing her nails and reading the instruction manual for the flamethrower, you can see a trio of pictures on the table. They are all of Fisher's character and Jake Blues. In every picture, Jake is wearing his sunglasses and hat.

Audio/visual unsynchronized:
During "Sweet Home Chicago", there is the sound of a baritone sax solo, but no one on stage is playing a baritone sax.(Tom Scott played bari for the BB band on SNL, but did not appear in this movie)

Prison Guard #1:
Yeah, the Assistant Warden wants this one out of the block early. Wants to get it over with fast.

Prison Guard #2:
Okay, let's do it.
[rattling the bars with his baton]

Prison Guard #2:
Wake up. Let's go, it's time.
[striking the sleeping Jake with his baton]

A musical comedy action fantasy should not work, especially when one
considers that it is the first SNL skit-to-screen adventure (which,
history
has shown us, is a decidedly mixed bag). But this one does. Two of the
best car chases in cinematic history bookend the film, and in between
there
are show-stopping musical numbers, raw humor, Illinois Nazis, and a
seriously disgruntled ex-fiancee. And it all makes perfect sense in the
context of the universe created by Aykroyd (who co-wrote), Landis (who
directed), and Belushi (his barely contained zeal provides the battery
pack
for this film).

Jake (Belushi) and Elwood (Aykroyd) are the former front men of a broken
down blues band (actually a stunning collection of blues talent) which
disbanded after Jake was arrested several years before. Upon his release,
he discovers that his boyhood orphanage home is about to be foreclosed
upon
for non-payment of property taxes. Beaten up by a nun, sung to by James
Brown, and touched by God, Jake sees the light and seeks to put the band
together for one last show — a charity benefit to save the
orphanage.

Their journey takes them from James Brown to Aretha Franklin to Ray
Charles,
John Lee Hooker to Cab Calloway. The movie showcases the overwhelming
talent of singers, musicians, and genres long out of vogue with popular
musical tastes. Indeed, this movie is a vehicle for giving these
performers
a chance to shine — to bring their music back to the masses and
ultimately
into pop-culture immortality (to go along with their more prestigious
musical immortality).

This film is guaranteed to make you tap your feet, laugh out loud, gasp as
both a mall and and entire fleet of Chicago police cars are destroyed, and
believe in the magical powers of an old cop car. Like I said, it's a
musical comedy action fantasy.