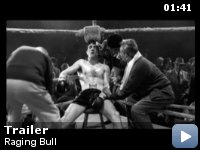 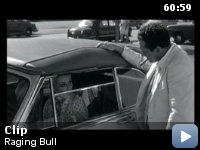 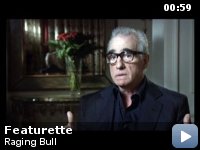 An emotionally self-destructive boxer's journey through life, as the violence and temper that leads him to the top in the ring, destroys his life outside it.

Storyline
When Jake LaMotta steps into a boxing ring and obliterates his opponent, he's a prizefighter. But when he treats his family and friends the same way, he's a ticking time bomb, ready to go off at any moment. Though LaMotta wants his family's love, something always seems to come between them. Perhaps it's his violent bouts of paranoia and jealousy. This kind of rage helped make him a champ, but in real life, he winds up in the ring alone.

Himself – Radio Announcer for Dauthuille Fight

In 2007, the American Film Institute ranked this as the #4 Greatest Movie of All Time.

Continuity:
When Joey and Salvy are told to shake hands (after the fight), their hands are interlocked in one shot, but in the next, they are back in their respective laps.

Jake La Motta:
I remember those cheers / They still ring in my ears / After years, they remain in my thoughts. / Go to one night / I took off my robe, and what'd I do? I forgot to wear shorts. / I recall every fall / Every hook, every jab / The worst way a guy can get rid of his flab. / As you know, my life wasn't drab. / Though I'd much…
[…]

Essential masterpiece; powerful De Niro; simply one of the best films of all time.


"Raging Bull" isn't the average, stereotypical underdog boxing movie,
because it isn't really about boxing at all. Like most great movies,
its focus is much deeper. It came out in 1980, earned Robert De Niro a
Best Actor Academy Award, and was marked down as another solid triumph
by director Martin Scorsese, whose previous 1976 outing with De Niro
earned them both critical acclaim (and for De Niro, an Oscar
nomination, although he would actually earn an Oscar for "Raging Bull"
four years later).

It dwindled in production hell for quite some time, with Scorsese's
drug use halting production and only the duo's strong willpower that
kept the project moving ahead. It was after De Niro read boxer Jake
LaMotta's memoirs that he knew he wanted to make the film, so Scorsese
and De Niro turned to Paul Schrader for a script. Schrader, who had
previously written "Taxi Driver" (1976), agreed, and wrote the
screenplay for them. The rest is history.

"Raging Bull" has often been regarded as the greatest film of the 80s.
To be honest, I'm not so sure about that, since various genres offer
different feelings and emotions (comparing this to a comedy might seem
rather silly). But to say it is one of the most powerful films of all
time would be no gross overstatement — it is superb film-making at its
finest.

De Niro gained 60 pounds to play LaMotta, which was an all-time record
at the time (later beaten by Vincent D'Onofrio, who gained 70 pounds
for Stanley Kubrick's "Full Metal Jacket"). His physical transformation
is on-par with any great screen makeover, especially the most recent,
ranging from Willem Dafoe in "Shadow of the Vampire" to Charlize Theron
in "Monster." In addition, co-star Joe Pesci also lost weight for his
role of Joey, LaMotta's short, eccentric brother. The greatest scene in
the film is when LaMotta accuses his brother of having an affair with
his wife. The tension is raw, the dialogue amazing, and the overall
intensity electrifying.

The film is most often compared to "Rocky," more than any other,
apparently because they both concern a certain level of boxing. As much
as I absolutely adore "Rocky," "Raging Bull" is a deeper, more
realistic film. But whereas "Raging Bull" is raw, "Rocky" is inspiring,
and that is one of the reasons I do not think these two very different
motion pictures deserve comparison, for the simple fact that they are
entirely separate from one another. The only connecting thread is the
apparently central theme of boxing, which is used as a theme in
"Rocky," and a backdrop in "Raging Bull." They're entirely different
motion pictures — one uplifting, the other somewhat depressing — and
the people who try to decide which is better need to seriously
re-evaluate their reasons for doing so. They both succeed splendidly
well at what they are trying to do, and that's all I have to say about
their so-called connection.

De Niro, who could justifiably be called the greatest actor of all
time, is at the top of his game here. In "Taxi Driver" he displayed a
top-notch performance. He wasn't just playing Travis Bickle — he was
Travis Bickle. And here he is Jake LaMotta, the infamous boxer known
for his abusive life style and somewhat paranoid delusions during his
reign as world middleweight boxing champion, 1949 – 1951. Throughout
the film, he beats his wife (played expertly and convincingly by the
19-year-old Cathy Moriarty), convinced that she is cheating on him, and
that is more or less what the film is truly about. The boxing is just
what he does for a living, and could be considered as a way to release
some of his deeper, harbored anger.

LaMotta has a close relationship with Joey, his brother, and their
interaction is often what elevates the film above others of its genre.
The dialogue is great, close to the perfection of Quentin Tarantino's
"Pulp Fiction," rich in that rapid-fire filthy language and brutal
insults. Pesci, who was on the verge of quitting showbiz at the time of
pre-production, was spotted by De Niro in a cheap B-movie named "The
Death Collector" (1975), a.k.a. "Family Business," a truly horrid film
that nevertheless showcased an early sign of things to come for Pesci.
De Niro wanted him for the movie and his premonition was either very
lucky or very wise — this is one of the best performances of Pesci's
entire career.

Scorsese shot the film in muted black and white, portraying a certain
era of depression and misery. To make the blood show up on screen
during the occasional fight scenes, Scorsese used Hershey's Syrup —
which is an interesting tidbit of trivia for any aspiring film-making
planning on filming a violent movie in black and white. But how often
does that happen?

This is certainly one of the most intense films Scorsese has directed,
and one of the most important of his career. Along with "Taxi Driver,"
it is an iconic motion picture that will stand the test of time for
years and years to come.

Scorsese and De Niro's partnership over the years has resulted in some
of the most influential and utterly amazing motion pictures of all
time: "Mean Streets," "Taxi Driver," "The King of Comedy," "Goodfellas"
and "Casino" come to mind almost instantly. But perhaps the one single
title that will be remembered as their most daring effort is "Raging
Bull," a motion picture so utterly exhilarating that it defies
description. It is simply a masterpiece for the mind and senses,
leaving you knocked out cold after its brutal one-two punch. If I had
to assemble a list of required viewing, this would be up there towards
the top.