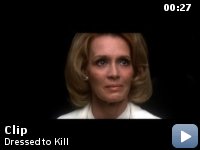 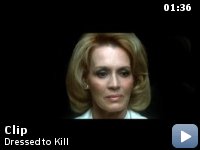 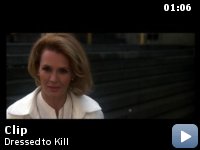 A mysterious, tall, blonde woman, wearing sunglasses murders one of a psychiatrist's patients, and now she's after the prostitute who witnessed it.

Storyline
While taking a shower, Kate Miller, a middle-aged, sexually frustrated New York housewife, has a rape fantasy while her husband stands at the sink shaving. Later that day, after complaining to her psychiatrist Dr. Robert Elliott about her husband's pathetic performance in bed, she meets a strange man at a museum and returns to his apartment where they continue an adulterous encounter that began in the taxicab. Before she leaves his apartment, she finds papers which certify that the man has a venereal disease. Panicked, Kate rushes into the elevator, but has to return to his apartment when she realizes she's forgotten her wedding ring. When the elevator doors open, she's brutally slashed to death by a tall blonde woman wearing dark glasses. Liz Blake, a high-priced call girl, is the only witness to the murder and she becomes the prime suspect and the murderess's next target…

Taglines:
The Latest Fashion In Murder

Continuity:
When Kate gets into the cab after the museum there is a specific rate listed on the outside of the cab. When she gets out there is a different rate.

Liz Blake:
I'm sorry, am I bothering you?

Hood #1:
You say she's bothering you?

Hood #2:
That's right, this bitch is bothering me.

Stunning exercise in audience manipulation,possibly even MORE effective than it's model,Psycho


Alfred Hitchcock's Psycho may be one of the most influential movies
ever-for a start it was at least partially responsible for the whole
subgenre of 'slasher' movies and the shower scene has inspired more
homages than you can count. Brian De Palma's thriller Dressed To Kill
is basically a semi remake of Psycho,right from the structure of it's
story to it's villain right down to certain specific scenes. It's also
an absolutely stunning piece of audience manipulation and perhaps more
importantly a cracking thriller. Watch this film knowing about the
Psycho element and as long as you don't mind some graphic sex and
violence you should have a whale of a time. In fact,to a modern
audience it may very well be more effective than Psycho {and this is
coming from a big Hitckcock fan}.

De Palma's intentions are apparent right from the beginning,which shows
a naked woman, played by Angie Dickinson 'enjoying herself' in a
shower,with huge close ups of her breasts {not Angie Dickinson's
though}. A man suddenly surprises and assaults her. Than we cut to
Angie and her husband having loveless sex on a bed. This whole opening
sequence has it all-the Psycho reference,the slight twisting of that
reference,the dreamy eroticism,the sudden shock,the surprise. It shows
De Palma,more than anything else,playing with his audience,manipulating
them like puppets on strings. Yes,like Hitckcock,but sometimes going
further. Basically,if you like this opening sequence,you will enjoy the
rest of the film.

While there definitely IS a plot {quite a familiar one,but you should
know this by now},it is Dressed To Kill's set pieces that stand
out,that show De Palma's brilliance. There's a dreamlike and subtly
erotic sequence in an art gallery where Dickinson is picked up by a
stranger,an incredible murder in a lift which is shocking without
showing THAT much blood,a thrilling chase in an underground train
station where the heroine is pursued not just by the killer but for a
while by a gang of youths,a very scary ending about which I won't go
into {except that it features another shower scene!}but where the
tension is ramped up to an incredible degree. Here,De Palma is BETTER
than Hitchcock.

Although the best scenes are those without dialogue,where De Palma just
lets Pino Donnaggio's lush,darkly beautiful score take over the
sound,there is quite a bit of fun to be had in the often deliberately
humorous dialogue,and the really rather cute relationship between nerdy
Keith Gordon and tough as nails Nancy Allen,who make a great team. The
identity of the killer is not exactly hard to spot,perhaps more work
could have been done here,but going by the cheeky attitude of the film
in general this may have been intentional.

When Dressed To Kill originally came out it was heavily criticised for
being misogynist,especially with the first third of the film {just in
case you HAVEN'T seen Psycho,I won't go into detail}. I've always
believed that this part of the film is about the possible dangers of
indulging one's fantasies. De Palma is NOT a misogynist anyway
really,think of the many memorable heroines of his films. Even if you
disagree, see Dressed to Kill to see an oft criticised but occasionally
brilliant director at the height of his powers.