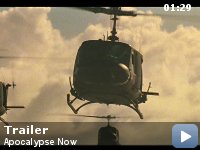 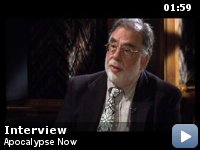 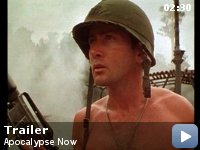 During the on-going Vietnam War, Captain Willard is sent on a dangerous mission into Cambodia to assassinate a renegade Green Beret who has set himself up as a God among a local tribe.

Storyline
It is the height of the war in Vietnam, and U.S. Army Captain Willard is sent by Colonel Lucas and a General to carry out a mission that, officially, 'does not exist – nor will it ever exist'. The mission: To seek out a mysterious Green Beret Colonel, Walter Kurtz, whose army has crossed the border into Cambodia and is conducting hit-and-run missions against the Viet Cong and NVA. The army believes Kurtz has gone completely insane and Willard's job is to eliminate him! Willard, sent up the Nung River on a U.S. Navy patrol boat, discovers that his target is one of the most decorated officers in the U.S. Army. His crew meets up with surfer-type Lt-Colonel Kilgore, head of a U.S Army helicopter cavalry group which eliminates a Viet Cong outpost to provide an entry point into the Nung River. After some hair-raising encounters, in which some of his crew are killed, Willard, Lance and Chef reach Colonel Kurtz's outpost…

James Caan was the director's first choice to play Col. Lucas. Caan, however, wanted too much money for what was considered a minor part in the movie. Harrison Ford was eventually cast in the role.

Incorrectly regarded as goofs:
After the helicopter carrying the wounded child leaves, Lance's clothing has changed from his Army fatigues to a pair of shorts (this is because of a cut scene in which Kilgore gives him a pair of shorts to surf in. The scene was restored in the Redux edition.)

Willard:
[voiceover]
Saigon… shit; I'm still only in Saigon… Every time I think I'm gonna wake up back in the jungle.

Willard:
When I was home after my first tour, it was worse.
[grabs at flying insect]

Willard:
I'd wake up and there'd be nothing. I hardly said a word to my wife, until I said "yes" to a divorce. When I was here, I wanted to be there; when I was there, all I could think of was getting back into the jungle. I'm here a week now… waiting for a mission… getting softer. Every minute I stay in this room, I get weaker, and every minute Charlie squats in the bush, he gets stronger. Each time I looked around the walls moved in a little tighter.

In my opinion, Coppola's best work


My favourite movie of all time. This was a flawed piece of work by
Coppola and seeing the documentary 'Heart of Darkness' made it even
more compelling. Coppola at this point was king of Hollywood after
making 'the Godfather' and 'GodfatherII' and had developed the ego
necessary to even dare try to make a movie like 'Apocalypse Now'.
Through sheer arrogance he went to the Phillipines with a partial
script and thought he would know what he would do when he got there.
Just as Captain Willard thought he would know what to do once he got to
Col. Kurtz's compound. And just like Willard, he DIDN'T know what he
was going to do once he got there. This is such a masterpiece of
American cinema, beautifully photographed and the river is such a
perfect metaphor and backdrop for the story. What I like most about
'Apocalypse Now' is that it offers no answers or conclusions.
Consequently, because of this open-endedness, it infuriates some
viewers who like their movies to be much more obvious.

This movie defies categorization. Some call it a war movie which it
isn't at all, really it is more of a personal study of man. The best
pic about Vietnam is 'Platoon' in my opinion and if a viewer is seeking
a retelling of the Vietnam War go there first for answers.

Coppola should be commended for his take on the bureaucracy of war
which he conveys quite effectively with the meeting with Gen.Corman and
Lucas (Harrison Ford) and the Playmate review. The sheer audacity of
Kilgore makes him an unforgettable character and the dawn attack will
always be a Hollywood classic.

It is an almost psychedelic cruise to a very surreal ending which makes
it a movie not accessible to everyone. Very challenging to watch but
rewarding as well. I could offer my explanations on each scene but that
would be totally pointless. This movie is intended for interpretation
and contemplation as opposed to immediate gratification.

A little footnote, definitely if your a first-time viewer of Apocalypse
Now, watch the original version first, the 'Redux' version is, I think,
more intended for the hardcore fan and is more of a curiosity than a
'new and improved' version of the movie