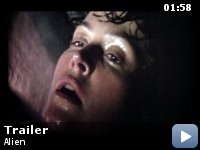 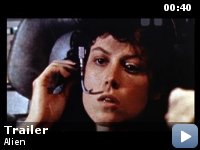 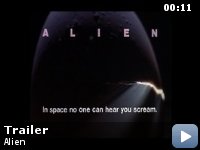 A mining ship, investigating a suspected SOS, lands on a distant planet. The crew discovers some strange creatures and investigates.

Storyline
The crew of the deep space mining ship Nostromo are awaken from hypersleep to investigate a strange signal from a nearby planet. While investigating the signal, they discover it was intended as a warning, and not an SOS.

Taglines:
It's Alien, the 8th passenger.

According to a quote from Veronica Cartwright in a film magazine, in the scene where the alien's tail wraps around her legs, they are actually Harry Dean Stanton's legs, in a shot originally filmed for another scene entirely.

Continuity:
During the introduction scenes of the Nostromo, the stars in the background are maintained even though the spaceship is shown from different angles.

Brett:
This is the worst shit I've ever seen, man.

Parker:
What you say? You got any biscuits over there?

Lambert:
I am cold.

Parker:
Still with us, Brett?

Parker:
Anybody ever tell you you look dead, man?

The mother of all movies


Back in early 20th century, Lumière brothers didn't have a clue of what
they were playing with. I'm freaking sure that if somebody could have
magically told them that thanks to their work, a movie like 'Alien'
would have been made in the future, they both would have died of a
sudden, shocked by the consequences of their labor, like an honest
scientist would if he was shown an evil use of his research. In that
sense, but in the best way imaginable, 'Alien' is the atomic bomb.

In my opinion, 'Alien' is the only perfect movie in the history of
cinema. Of course, this could be debatable, but of all the films I've
watched since I was born, this is the only one in which I haven't been
able to find the slightest flaw. It gets a golden ten out of ten.
Bright, solid and massive.

I could go on with a panegyric, but I'll try to be short and accurate:

The direction is just perfect. Every shot is marvellous, every movement
of the camera is breathtaking. There is absolutely nothing you could
add or subtract. Touch it, and you spoil it. Seriously.

The acting is splendid. The performances build a credible world
centuries away. I don't know about you, but this take on the future was
unveliabably acceptable. Sigourney Weaver is more than a revelation,
John Hurt is a master, and the rest are nothing short of marvellous.

The script is a work of art, the story is mesmerizing,
well-constructed, well-developed, and free of absurd twists. Its
simplicity and efectiveness are yet, 25 years after, to be matched.

The atmosphere is pure genius. Gothic, claustrophobic and sometimes
baroque. The use of light and dark is beyond description, the use of
sound is as creepy as it gets.

The FX are the best possible for 1979. In the time of the release, some
scenes were stomach churning.

The score. Jerry Goldsmith's work matches the images so perfectly it
seems to bleed from them. It is and will be the best soundtrack for a
sci-fi flick in space ever.

The tagline. "In space, no one can hear you scream". THIS is a tagline.

And, of course… the alien. The only alive creature that can steal
Weaver the movie. Its design is the most innovative I've seen. It has
spawned dozens of disgraceful imitations. This is the real deal. Not
only the look, but the complete design of a life form, including
biological features. Acid instead of blood. Jaws inside jaws. What more
could you possibly want? This is how a movie is done.

A very good sign of a movie that has gone down in history is the amount
of collectively well remembered scenes. Well, 'Alien' has so many that
I won't go into it. This movie contains so many iconic scenes that has
become an icon itself.

So, what else? I urge all young directors to watch this movie a zillion
times, as I've already done, and take notes all along. But not in order
to rip off from it, as many others have done, but to learn, learn,
learn, learn and learn how a movie should be done. 'Casablanca'? You
must be joking.

Oh, I almost forget! There's a lovable cat in it.