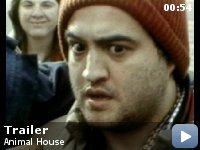 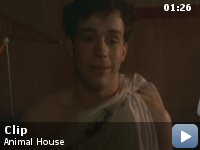 At a 1962 College, Dean Vernon Wormer is determined to expel the entire Delta Tau Chi Fraternity, but those troublemakers have other plans for him.

Storyline
Faber College has one frat house so disreputable it will take anyone. It has a second one full of white, anglo-saxon, rich young men who are so sanctimonious no one can stand them except Dean Wormer. The dean enlists the help of the second frat to get the boys of Delta House off campus. The dean's plan comes into play just before the homecoming parade to end all parades for all time.

Taglines:
Relive the best 7 years of your college education.

Continuity:
When Niedermeyer closes the door on Flounder at the Omega house they show a close up of him with the stairway in the background. Two red dressed girls are coming down the stairs. A second later the stairway is empty and then the girls start down the stairs again.

Otter:
Let me give you a hint. She's got a couple of major-league yabbos.

Boon:
You're gonna hump her brains out, aren't you?

You'll have to excuse me and some of the other proponents of 'National
Lampoon's Animal House' if we seem a little defensive about the movie.
That's because it's often not recognized as the superior comedy classic
that
it is. Instead, too often it is lumped in with the multitude of inferior
films that it inspired, which is totally unfair.

Some of the conventional wisdom about 'Animal House' is absolutely right,
though. John Belushi does give a bravura performance that is reminiscent
of
the great comics before him like Chaplin, Keaton (Buster, not Michael),
the
Marx Brothers, etc., and he does it with a wonderful economy of words. His
character of "Bluto" Blutarsky is often emulated and imitated but many
times
the persons doing so have no idea what it was that made him and his
performance so great.

Tim Matheson as "Otter" and his other frat house buddies were also
prototypes that were much imitated too, and again often without success.
Otter was the quintessential smooth talker, always working an angle on
everybody, especially the ladies. When a woman tells him that his
lovemaking
wasn't that great, he cocks his head, points a finger at himself and
mouths
the words, "not great?" in mock disbelief. Before Tom Hanks got "Big" he
made a career out of playing this character. Also John Vernon set a
standard
for straight men with his portrayal of the beleaguered Dean Wormer,
plagued
by his "zoo fraternity."

Not all of the movie's humor aims low, by any means; some of it is quite
sophisticated. (Yes, you read it right.) The screenwriters and director
John
Landis did a great job evoking Kennedy-era America and they found a lot to
laugh at. This comedy is an unqualified classic by the simplest
definition–
it makes you laugh, long and loud.