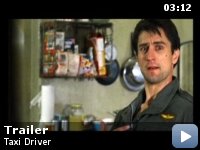 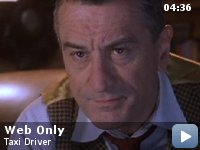 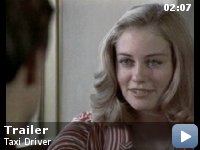 A mentally unstable Vietnam war veteran works as a nighttime taxi driver in New York City where the perceived decadence and sleaze feeds his urge to violently lash out, attempting to save a teenage prostitute in the process.

Storyline
Travis Bickle is an ex-Marine and Vietnam War veteran living in New York City. As he suffers from insomnia, he spends his time working as a taxi driver at night, watching porn movies at seedy cinemas during the day, or thinking about how the world, New York in particular, has deteriorated into a cesspool. He's a loner who has strong opinions about what is right and wrong with mankind. For him, the one bright spot in New York humanity is Betsy, a worker on the presidential nomination campaign of Senator Charles Palatine. He becomes obsessed with her. After an incident with her, he believes he has to do whatever he needs to to make the world a better place in his opinion. One of his priorities is to be the savior for Iris, a twelve-year-old runaway and prostitute who he believes wants out of the profession and under the thumb of her pimp and lover Matthew.

Jennifer Jason Leigh did an audition for the role of Iris, but came close to Jodie Foster on the final day of auditions.

Revealing mistakes:
While Travis is checking the .44 Magnum revolver offered by the gun dealer, the cylinder emits a clicking sound while he spins it. In fact, the cylinder of a double action revolver such as this one does not click when it is rotated.

Personnel Officer:
[to the dispatcher]
Harry, answer that.
[to Travis]

Personnel Officer:
So whaddya want to hack for, Bickle?

Travis Bickle:
Yeah, I know. I tried that.

Personnel Officer:
So what do you do now?

Travis Bickle:
Well, I ride around nights mostly… subways, buses… I figure, you know, if I'm gonna do that I might as well get paid for it.

A towering classic of American cinematic power. Martin Scorsese teams up
with one of the most intense actors of that time to create a masterpiece of
urban alienation. Paul Schrader's magnificent script paints a portrait of
loneliness in the largest city of the world. Travis never once enters into
a meaningful relationship with any character anywhere in the film. He is
the most hopelessly alone person I've ever encountered on film.

He is alone with his thoughts, and his thoughts are dark ones. The film
fools you on a first viewing. Is Travis an endearing eccentric? Sure, he's
odd, but he's so polite, and he's got a quirky sense of humor. His
affection for Betsy is actually rather endearing. But on a second view, you
see it for what it is. The audience comes to see Travis's psychosis
gradually, but there's actually far less development than one might think.
When he talks about cleaning up the city, the repeat viewer knows he doesn't
mean some sort of Giuliani-facelift. This is less a film about a character
in development as it is a kind of snapshot. To be sure, it takes the
stimulus to provoke the response, but does that imply some kind of central
change in the character?

Tremendous supporting roles are brought to life through vivid performances
by Keitel and Foster especially. Shepard's character, Betsy, is little more
than a foil to highlight Travis's utter alienation from society, but she is
still impeccably portrayed. With only two scenes that don't center on
Travis, it is unavoidably De Niro's show. The life with which the
supporting cast imbues their characters is a credit to themselves, and to
the director's willingness to let the film develop from the intersection of
diverse ideas and approaches. What would the plot lose by eliminating the
Albert Brooks character (Tom)? Nothing at all. He makes almost no impact
on Travis's life, which is where the plot lives. But his inclusion makes
the film as a whole much richer and fuller.

As a piece of American cinema history, this film will live forever. But far
more important than that, this film will survive as a universal,
ever-relevant examination of the workings of the alienated mind. The story
doesn't end when the credits roll. We know Travis will snap again. But the
story doesn't end with Travis either. It continues today in the cities and
in the schools. The film is about the brutal power of the disaffected mind.

This film didn't cause the incidents in Colombine, or Hawaii, or Seattle, or
wherever you care to look, even with all of its disturbing images of
violence. It didn't cause those things. It predicted them.