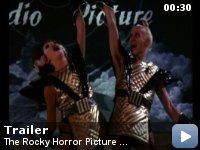 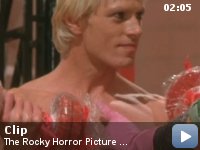 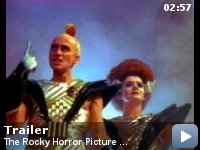 A newly engaged couple have a breakdown in an isolated area and must pay a call to the bizarre residence of Dr. Frank-N-Furter.

Storyline
It's the weird and wonderful as newly engaged couple Brad and Janet encounter a problem when they car halts in the rain. They both look for contact only to find themselves at the castle of Dr. Frank-N-Furter a transvestite. A place to stay is offered, but will Brad and Janet want to remain there? Especially when a large group of Transylvanians dance to the 'Time Warp', Dr. Frank-N-Furter builds his own man and a whole host of participation for the audience to enjoy.

The Criminologist – An Expert

Christopher Malcolm and Julie Covington played leads Brad and Janet in the original stage musical when it opened at London's Royal Court Theatre (19 June 1973). Neither went on to participate in this movie adaptation.

Errors made by characters (possibly deliberate errors by the filmmakers):
When Eddie starts riding his motorcycle up the ramp, a Transylvanian on the left of the screen accidentally knocks the head off the statue prop.


Those who gave this gem a low score – Please! Crawl back in your
cardboard life and stay there! This film bubbles with zest, wit, subtle
humor, raw humor, strange scenes, great songs and a huge host of
memorable characters. Most of the characters are drawn as sharply as if
a straight razor…well, not straight…as if a razor had been used.
Not intended for the super straight part of our culture, which is why
it usually plays at midnight shows, but you'll notice that it's been
playing steadily for 30 years now, especially along the American
coasts, which is a better record that almost anything else you can
think of (excluding Gome With The Wind in Atlanta, a single town). I
even took my mother to one of the 15 or so theater viewings I've
attended. She thought the dressed up audience was a little strange, but
she found out why they were so enthusiastic and quite liked the show.
It's just a time slip….