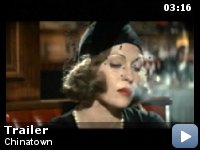 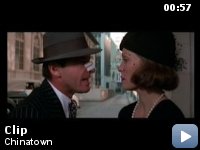 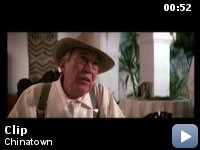 A private detective investigating an adultery case stumbles on to a scheme of murder that has something to do with water.

Storyline
JJ 'Jake' Gittes is a private detective who seems to specialize in matrimonial cases. He is hired by Evelyn Mulwray when she suspects her husband Hollis, builder of the city's water supply system, of having an affair. Gittes does what he does best and photographs him with a young girl but in the ensuing scandal, it seems he was hired by an impersonator and not the real Mrs. Mulwray. When Mr. Mulwray is found dead, Jake is plunged into a complex web of deceit involving murder, incest and municipal corruption all related to the city's water supply.

The
Chinatown screenplay is now regarded as being one of the most perfect screenplays and is now a main teaching point in screen writing seminars and classes everywhere.

Anachronisms:
During water hearings in town hall, one spectator reads a Sunday newspaper comics section in which all the panels are clearly free-form Seventies style art, nothing like you'd see in comic strips of the Thirties.

Jake Gittes:
All right, Curly. Enough's enough. You can't eat the Venetian blinds. I just had them installed on Wednesday.

Capturing the True Spirit of Film-noir

The seventies were the last years of great (American) films. I say
films because when we speak of movies nowadays, we allude to
blockbusters that generate hundreds of millions of dollars, the least
amount of controversy, and are mostly inane crowd pleasers with
tacked-on endings.


Consider the output of influential film makers Allen during that time:
Coppola, Scorsese, Altman, Lumet, Ashby, Bogdanovich, to name a few
Americans, not to mention European directors Fellini, Bergman,
Wertmuller, Truffaut, Argento, Saura, and Bunuel — all household names
in those days. Before Spielberg and Lucas came along, not a single one
of these made movies appealing to the "summer blockbuster tradition,"
and unlike Spielberg or Lucas, they have a body of work filled in high
artistic quality with minimum special effects and a lasting mark on
future generations.

Polanski is another one of these directors, and with "Chinatown," he
reaches his directorial peak amidst the scandals which seemed to taint
everything except his art. One can only imagine him in the forties,
living his scandals, and transmuting this into high art — when
film-noir was at its darkest. Thankfully he lived in a time which did
not demand the "happy ending" or re-shoots in order to be politically
correct — else "Chinatown" would have lost its devastating punch and
conformed to the norm.

A departure from the horror genre which brought Polanski to stardom, he
re-creates an equally grim genre with his jaded view of 1930s Los
Angeles down to the choice of the color palette, and using the acting
powers of Dunaway and Nicholson to a fantastic effect, he creates
haunting characters who can't be easily dismissed as film-noir
archetypes without looking very closely at their reactions, listening
to their words, and following their progressive involvement in a plot
which threatens to swallow them whole, and ultimately does. And having
Huston play Noah Cross — who virtually took noir to its heights with
"The Maltese Falcon" — Polanski hits the mark dead center, because
Huston is the hardened heart of the corruption in "Chinatown." In brief
scenes he creates a character almost unbearably evil with a hint of
madness just underneath, and how he affects the characters around him
will pervade the viewer long after the credits have rolled — after
all, he is the person who tells Nicholson he has no idea what he's
getting himself into.

I doubt this movie could be made today for reasons stated above. I'm
thankful Polanski's vision prevailed, and not Towne's. Film-noir is a
genre about human darkness, and here, the envelope is pushed all the
way through, making this film, in my opinion, rank second to "The
Maltese Falcon."