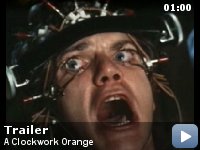 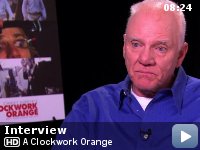 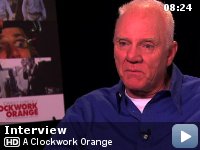 In future Britain, charismatic delinquent Alex DeLarge is jailed and volunteers for an experimental aversion therapy developed by the government in an effort to solve society's crime problem… but not all goes to plan.

Storyline
Protagonist Alex is an "ultraviolent" youth in futuristic Britain. As with all luck, his eventually runs out and he's arrested and convicted of murder and rape. While in prison, Alex learns of an experimental program in which convicts are programed to detest violence. If he goes through the program his sentence will be reduced and he will be back on the streets sooner than expected. But Alex's ordeals are far from over once he hits the mean streets of Britain that he had a hand in creating.

Taglines:
The Breakthrough Presentation Of Stanley Kubrick's Clockwork Orange For The Millions Who Were Not Allowed To See It Until Now!

The first line of the novel is "What's it going to be then, eh?" and this line is repeated frequently throughout the book. Another recurring phrase is "dressed in the heighth [sic] of [insert adjective here] fashion," which is how Alex describes every single set of clothes that he or anyone else is wearing. The movie omits all but one occurrence of each phrase. Prison Chaplain Godfrey Quigley is introduced with the line "What's it going to be, eh?" In the next scene Alex imagines himself as a first-century executioner "dressed in the height of Roman fashion."

Revealing mistakes:
The wine Alex drinks appears far too light in color to be a 10 year old Medoc. Stanley Kubrick did use the actual wine described by Alex (specifically a 1960 Chateau Beau Site Haut Vignoble). But after each take water was added, ostensibly to keep the wine level consistent without intoxicating Malcolm McDowell. By the time Kubrick got what he wanted the wine was visibly watered down.

Alex:
There was me, that is Alex, and my three droogs, that is Pete, Georgie, and Dim, and we sat in the Korova Milkbar trying to make up our rassoodocks what to do with the evening. The Korova milkbar sold milk-plus, milk plus vellocet or synthemesc or drencrom, which is what we were drinking. This would sharpen you up and make you ready for a bit of the old ultra-violence.

One of those films you have to watch multiple times


It's hard to judge a film such as this. Its cold and hard, yet can be
exhilarating and sarcastic. It can be average, yet it can be visionary.
Exploitive? Satirical? Too many questions to consider when one watches
this film.


Even after 34 years, this film still speaks volumes about our current
culture, which many ideals are ringing true today. The younger
generations are out of control due to lack of parental control, junk
culture is becoming commonplace, violence is desensitizing the masses,
and we all seem to be enjoying the ride on the way down. It's very
difficult to find movies which can make such startling commentary, yet
hold on to such accusations for an extended period of time. Nowadays,
films are focused-grouped to death, conformity is more powerful than
artistry, and money is far more important than quality. Kubrick took a
huge leap with this film, challenging society to take a hard look at
itself. Unfortunately, society wasn't ready for this film, which is why
it is revered now more than ever.