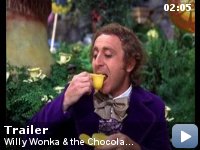 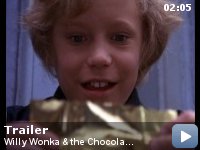 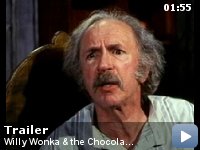 A poor boy wins the opportunity to tour the most eccentric and wonderful candy factory of all.

Storyline
The world is astounded when Willy Wonka, for years a recluse in his factory, announces that five lucky people will be given a tour of the factory, shown all the secrets of his amazing candy, and one will win a lifetime supply of Wonka chocolate. Nobody wants the prize more than young Charlie, but as his family is so poor that buying even one bar of chocolate is a treat, buying enough bars to find one of the five golden tickets is unlikely in the extreme. But in movieland, magic can happen. Charlie, along with four somewhat odious other children, get the chance of a lifetime and a tour of the factory. Along the way, mild disasters befall each of the odious children, but can Charlie beat the odds and grab the brass ring?

According to director Mel Stuart's "Pure Imagination: The Making of Willy Wonka", when Gene Wilder walked in to audition, Stuart knew before he'd even uttered a single word that he had found his Willy Wonka. The audition convinced him even further, so when Wilder finished and left the room, Stuart chased him down the hallway, cut him off at the elevator bank, grabbed his arm and told him "You're doing this picture, no two ways about it! You are Willy Wonka!" Producer David L. Wolper, however, was furious because he hadn't yet had the chance to negotiate a fee.

Bill, candy store owner:
Wonka's got a new one today.

Children:
What is it?

Bill, candy store owner:
This is called a Scrumpdiddlyumptious Bar.

Willy Wonka and the Chocolate Factory is a truly magnificent piece of
filmmaking and remains one of the most fascinating and wonderful adventure
films ever made. One of the things that makes this film so intriguing is
that it could have been made at any time. I mean, just from watching it, you
can't really tell when it was made. It has been one of my favorite films for
almost 20 years now, and it wasn't until today that I actually realized when
it was made. Watching it again last night, I had convinced myself that it
was made sometime in the early to mid 80s, and I was shocked to find out
that this year is the movie's 30 year anniversary. Until now, pretty much
the only movie I associate with 1971 is A Clockwork Orange, and it's just
strange for some reason to find out that this classic movie was made so long
ago.

At any rate, Willy Wonka is a tremendously imaginative and inspiring film.
It's a family film, but one of the most important aspects of a family film
is that it has to be enjoyable for a variety of ages. This is what makes
movies like Toy Story and Shrek such huge successes- the adults will love it
just as much as the kids are sure to. Hence: `family' film. On the other
hand, this is also the downfall of such other movies that are strictly for a
much younger audience, like Cats & Dogs. The makers of Willy Wonka and the
Chocolate Factory understood this very well, and you can see that just by
the way that the cast is divided. Here are all of these kids (funny how it
was only kids who found those golden tickets…) who were at this candy
factory, and they had each elected to bring one of their parents with them
as the one admissible member of their family who was allowed by Wonka to
accompany them to the factory.

One of the best elements of this film is the excellently written script and,
even more, the songs. These are some of the best songs in any movie ever
made, rivaling even the best of the songs from Disney's films (hey, some of
them are really good…). There are, of course, some exceptions, such as
`Cheer up, Charlie,' which I have been fast-forwarding through for as long
as I can remember, but for the most part, the songs are fun to listen to and
they pertain to life outside the movie. They are not just songs about the
candy-making genius of Willy Wonka or the excitement of being able to tour
his mysterious factory, but they are about life in the real world. They're
about believing in yourself and being motivated in life (`Anything you want
to, do it. Want to change the world, there's nothing to it…'), but there are
also some that have to do mostly with the movie but are still just as
enjoyable, such as the classic song that Wonka sings in the tunnel on board
his boat (curiously named `Wonkatania'), which was creepily covered by
Marilyn Manson a couple of decades later.

The dialogue in the film contains some of the most interesting little
tidbits in the entire movie. Wonka's lines, in particular, are wonderfully
strange and amusing (`A little nonsense now and then is cherished by the
wisest men.'). He is a truly eccentric and fascinating man, and Gene Wilder
captures the character flawlessly, as he delivers the lines from the
brilliantly written script. Willy Wonka and the Chocolate Factory is one of
those rare movies that comes along and completely changes the way that
fantasy films are made. It's all about having fun in life and being hopeful
against all odds and, most of all, being able to have fun in life. There are
times when you have to let things go for a while and just act like a kid.
Eat candy, run around and play, steal fizzy lifting drinks and bump into the
ceiling that now has to be washed and sterilized, it doesn't matter as long
as no one's looking. That's such a trivial little quirk of Wonka's (who
sterilizes their ceiling?) that it becomes obvious that the movie is trying
to say that it's okay to break the rules every once in a while. Have fun in
life.

Besides being absolutely mouth-watering (to this day, I still fantasize
about sinking my teeth into one of those gigantic gummy bears), the movie is
an uplifting adventure that warms the heart and sends people of all ages
away with fairy tale candies dancing in their heads and wonderful songs just
behind their lips. It is an always-welcome vacation from reality for people
of all ages, and it should always be remembered and loved for that. This
movie will ALWAYS be a must-see.