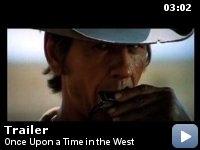 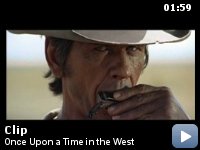 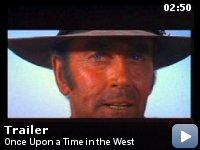 Epic story of a mysterious stranger with a harmonica who joins forces with a notorious desperado to protect a beautiful widow from a ruthless assassin working for the railroad.

Storyline
Story of a young woman, Mrs. McBain, who moves from New Orleans to frontier Utah, on the very edge of the American West. She arrives to find her new husband and family slaughtered, but by who? The prime suspect, coffee-lover Cheyenne, befriends her and offers to go after the real killer, assassin gang leader Frank, in her honor. He is accompanied by Harmonica on his quest to get even. Get-rich-quick subplots and intricate character histories intertwine with such artistic flair that this could in fact be the movie-to-end-all-movies.

Taglines:
There were three men in her life. One to take her… one to love her… and one to kill her.

The main selling point to producers for the use of the Techniscope process was the savings in camera negative. But, another advantage was being able derive the 2.35:1 aspect ratio while shooting with spherical lenses which avoided the distortion created by anamorphics during certain camera moves and extreme close-ups (such as those used by Sergio Leone). This film, together with
The Good, the Bad and the Ugly(also directed by Leone and shot by Tonino Delli Colli) are now considered masterpieces in the use of the Techniscope system.

Continuity:
During Harmonica's confrontation with Frank towards the end of the movie, his hair appears to have grown significantly from earlier in the film. However, when he enters the house to talk to Jill, his hair is short again.

No western has ever come close to this one….and no western ever will.

I can't quite find the words to even come close to describing the pure
brilliance of this movie.
When this movie was made, the western genre was dominated by the big
hollywood studios. The western was taken by these studios and transformed
into an opportunity to portray classic superheroes like John Wayne and Burt
Lancaster in their fight against all sorts of smalltime crooks and outlaws
in smalltime stories and smalltime towns.
It was a genuine effort to portray 'Americanism', the American Way, along
with a romanticised view of the west as 'Frontier country' where good
always
triumphed over bad and where the life was hard but honest.
It was the American Way.

And then came this film.
The title, 'Once Upon A Time In The West' must have seemed to mean nothing
more than 'just another western' to the unexpecting viewers at the time. Oh
boy were they wrong.
With this movie, Sergio Leone singlehandedly redefined the western genre
and
no American western would ever match the brilliant spirit in which it was
made.
While the story is basically the same as in any other western, it is the
WAY
in which it is presented that so clearly distances this western from
others.
Whereas other westerns are simply stories that are designed to entertain,
this movie is an emotional masterpiece that will move your heart. Sergio
Leone takes the ordinary western and replaces words with looks, and
conversations with feelings and emotions.
With his brutal but honest portrayal of the sheer hardness of life and
death
in those times he thoroughly destroys the old romantic idea of the west as
a
'generally-hunky-dory-kind-of-scene with the occasional bad guy and indian'
and replaces it with an eerie, dark, hot and dry place where life is cheap
and only the strongest will survive.

I cannot adequately convey in words the way in which Sergio Leone deepens
and defines the characters by pure means of visual persuasion.
It starts with the three gunman in the beginning of the movie, waiting for
some reason at a train station for someone or something that obviously is
going to be on the next train. No explanation, no conversation; not a word
is said. Even the stationmaster is ushered into captivity without a single
audible threat. Then comes the waiting…
Any other director would have skipped directly to the moment of arrival,
but
Sergio Leone takes minutes of boredom and translates it into a visual
feast,
deepening the characters that are portrayed and making them more human,
more
real to the viewer, while at the same time encompassing us with a deep dark
sense of foreboding.
This way in which the story is not just augmented but in times completely
replaced by the sheer visual drama, is perfected by the absolute fantastic
music, directed by Ennio Morricone.
Who needs words and explanations when the combined forces of cinematic
mastery and heart-tearing music are not just able to carry the story, but
pick it up and push it up to such heights of excellence that it has no
equal
in it's genre?

Another great feat that adds to the power of this movie is the minimalistic
way of portrayal of the characters as real, emotional people.
Not a single word is said that isn't required for the understanding of the
story, yet the characters feel more true than those in movies where whole
conversations are added merely to explain their motives.
Instead of words, the camera focuses on the characters…so that you can
simply read the emotion off their faces. Often no explanation is given
other
than than a mere facial expression.
No superheroes or supercriminals, just real, desire-laden, traumatised,
obsessed people that act upon motives inherently understood by the viewer.

All in all this is without a single doubt in my mind the greatest western
of
all times, and even though Sergio Leone has made many more mindblowing,
heart-shattering westerns like this one, like 'A Fistful of Dynamite', 'The
Good The Bad and The Ugly', and 'For a Few Dollars More', none could equal
'Once Upon A Time In The West' in sheer magnitude of perfection.
Western has never been the same since….

I only wish I'd have been there in 1969 when the movie was new and see it,
for the first time with fresh innocent eyes and an unexpecting mind..just
like 2001: A Space Odyssey (also of 1969, a year of legends).

A tip for those who have never seen this movie:
Bribe, beg, borrow, or steal yourself into possession of a Videobeam and
Hifi-audio equipment if you can't find a cinema that is showing this movie.
Turn the audio up WAY HIGH (never mind the neighbors) and prepare never to
be the same again………

I (obviously) gave this movie a 10 because no matter how hard I try I can't
find anything less than perfect about it.