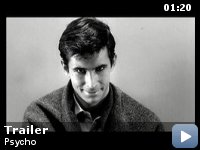 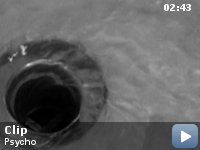 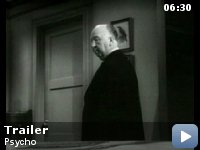 A young woman steals $40,000 from her employer's client, and subsequently encounters a young motel proprietor too long under the domination of his mother.

Storyline
Phoenix officeworker Marion Crane is fed up with the way life has treated her. She has to meet her lover Sam in lunch breaks and they cannot get married because Sam has to give most of his money away in alimony. One Friday Marion is trusted to bank $40,000 by her employer. Seeing the opportunity to take the money and start a new life, Marion leaves town and heads towards Sam's California store. Tired after the long drive and caught in a storm, she gets off the main highway and pulls into The Bates Motel. The motel is managed by a quiet young man called Norman who seems to be dominated by his mother.

Taglines:
The master of suspense moves his cameras into the icy blackness of the unexplored! (window card)

If you look attentively you can notice that nearly every time a driver gets out of his car he does so through the passenger side, a seemingly odd behavior. This is due to the bench seating in older cars, and Alfred Hitchcock's desire to continue the shot without either moving the camera to follow the actor or having the actor walk between the car and the camera.

Revealing mistakes:
When Janet Leigh is in the car dealer bathroom getting the cash, as the envelope is being returned to her purse the top couple bills fold back revealing a $1 bill, not another $100 as the stack is expected to contain.

Tom Cassidy:
I never carry more than I can afford to lose! Count 'em.

Tom Cassidy:
[staring at Marion]
I don't! That's how I get to keep it!

Yes, everything you've heard is true. The score is a part of pop culture.
The domestic conflict is well-known. But nothing shocks like the
experience
itself.

If you have not seen this movie, do yourself a favor. Stop reading thse
comments, get up, take a shower, then GO GET THIS MOVIE. Buy it, don't
rent.
You will not regret it.

"Psycho" is easily the best horror-thriller of all time. Nothing even
comes
close…maybe "Les Diaboliques" (1955) but not really.

"Psycho" has one of the best scripts you'll ever find in a movie. The
movie's only shortcoming is that one of the characters seems to have
little
motivation in the first act of the movie but as the story progresses, you
realize that Hitchcock (GENIUS! GENIUS! GENIUS!) in a stroke of genius has
done this on purpose, because there is another character whose motivations
are even more important. Vitally important. So important that you totally
forget about anything else. I was lucky enough to have spent my life
wisely
avoiding any conversation regarding the plot of this movie until I was
able
to see it in full. Thank God I did! The movie has arguably the best
mid-plot
point and climactic twist in thriller history, and certainly the
best-directed ending. The last few shots are chilling and leave a
lingering
horror in the viewer's mind.

Just as good as the writing is Hitchcock's direction, which is so
outstanding that it defies explanation. Suffice it to say that this movie
is
probably the best directorial effort by film history's best director. I
was
fortunate enough to see this movie at a big oldtime movie house during a
Hitchcock revival. Janet Leigh, still radiant, spoke before the film and
explained how Hitchcock's genius was in his ability to 1) frighten without
gore and 2) leave his indelible mark on the movie without overshadowing
his
actors (like the great Jean Renoir could never do). "Psycho" is clearly
its
own phenomenon, despite all the big-name talent involved.

Hitchcock does not disappoint by leaving out his trademark dark humor. His
brilliance is in making a climax that is at once both scary and hilarious.
When I saw it in the theatre the audience was both gasping in disbelief
while falling-on-the-floor laughing.

Tony Perkins. Janet Leigh got much-deserved accolades for this film, but
it
is Perkins who gives what remains the single best performance by an actor
in
a horror movie. He is so understated that his brillance passes you by. He
becomes the character. The sheer brillance of the role is evidenced by the
ineptitude of the actors in Gus Van Sant's 1998 (dear God make it stop!)
shot-for-shot "remake." Though the movies are nearly identical,
Hitchcock's
is superior mostly because of the acting and the atmosphere (some of the
creepiness is lost with color). This is made obvious by the initial
conversation between Leigh's character and Perkins, a pivotal scene. The
brilliance of Perkins in the original shines even brighter when compared
with the ruination in the remake even though the words and the shots were
exactly the same. The crucial chemistry in this scene lacking in the
remake
gives everything away and mars our understanding of upcoming events. The
fact that Perkins could never escape this role – his star stopped rising
star as it had done in the 50s – proves that he played the part perhaps
too
well.

I keep using the word brilliant, but I cannot hide my enthusiasm for this
movie. It is wholly unlike the overblown, overbudget, overlong fluff
spewing
all-too-often out of Hollywood today. "Psycho" is simple, well-crafted and
just the right length.

Eleven-and-a-half out of ten stars.